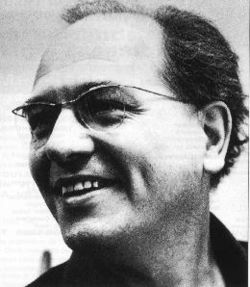 This work was commissioned by Pierre Boulez and the Domaine Musical, composed between October 5, 1955, and January 23, 1956, and premiered on March 10, 1956, at the Petit Théâtre Marigny in Paris. It is scored for a small orchestra of woodwinds, brass, percussion, and a solo piano. In the score Messiaen has a diagram of the placement of the instruments in order to get the balance he wanted. The composer wrote:

Actually, in Oiseaux exotiques, I’ve linked percussion with woodwinds, brass, xylophone, glockenspiel, and piano, and this percussion obviously plays no part in bird songs; it constitutes a strophic support based on rhythms, all juxtaposed -- the strophic form (with diminutions effected on Karnatic rhythms and Indian deçî-tâlas) evolves independently of the bird songs, whose freedom is much greater. So there’s plenty of strictness and freedom, and, all the same, a certain element of composition in the “bird-song material,” since I’ve randomly placed side by side birds of China, India, Malaysia,and North and South America, which is to say, birds that never encounter each other.

The sources for the bird song used in the work were taken from phonographs titled American Bird Songs and from birds at a market in Paris. Rhythms in the piece came from Indian talas and Greek rhythms. The Greek system is based on a long and short notes based on a ratio of 2:1. The rhythms appear in the non-pitched percussion (see Discussion tab above for more information).

Throughout his life, Messiaen was fascinated by birdsong. From early childhood, he was attracted to the twittering language of birds, and as an adult came to believe that it was much more than mere communication; it was music. No other composer (in fact no other ornithologist) was ever so completely dedicated to the painstaking transcription, study, and musical application of birdsong.

An early manifestation of Messiaen’s style oiseaux appeared in the famous Quartet for the End of Time, composed during his internment at the Görlitz prison camp during World War II. In 1953, Messiaen shifted his compositional focus almost entirely to birdsong, first producing Reveil des oiseaux(The Birds Awake) for piano and orchestra, containing songs from an impressive 38 species.

Oiseaux exotiques, written three years later, features a more strident ensemble of woodwinds, brass, and percussion -- with the piano acting as a soloist in what Messiaen describes as “almost a piano concerto.” Where Reveil incorporates songs one might hear between midnight and noon in the European Jura mountain range, Oiseaux exotiques features forty-seven species from India, China, Malaysia, and the Americas -- a collection that Messiaen acknowledged could never exist together in nature.

Oiseaux is roughly divided into nine sections. Some are lengthy medleys of tightly intertwined songs for the entire ensemble. Some are brief interludes showcasing individual birds in smaller instrumental combinations. Interspersed among them are several virtuosic piano cadenzas.

The work opens with a pair of shrieks from the Indian minah bird, followed by its full song in extreme slow motion. Note the long sequence of repeated notes at the end of this first melody. It will return in the piece’s dramatic final moments. A long tam-tam crescendo is a prelude to the song of the prairie chicken, whose nasal character is scored for clarinet and oboe in its lower registers. The long medley at the work’s center is introduced by the percussion (snare drum and woodblock) featuring rhythms derived from Hindu and Greek music -- the only “unfeathered” music in the piece. The final piano cadenza treats the songs of two North American species, the bobolink and the catbird (with its characteristic “maeow”), as a kind of two-part invention.

Oiseaux exotiques was commissioned by Messiaen’s star pupil Pierre Boulez and premiered as part of his now legendary Domaine musicale concert series in Paris in March 1956. The piano soloist was Messiaen’s second wife, Yvonne Loriod, to whom the piece is dedicated. 2016 marks the piece’s sixtieth anniversary.