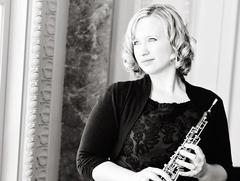 Each movement of the concerto centers one of the following infinite objects or ideas:

In the movement Mirrors, two oboes trade a small motive that shifts, grows, and morphs throughout the movement until the final climactic cadenza between the two oboes.

The concerto concludes with Circles, another game of chase between two oboes. A circular, spinning motive is traded between the two soloists, one at a time and in synchronization, until all of the winds join in with the spinning motion until the raucous conclusion.

Many thanks to Dr. Tracz and the KSU Wind Ensemble for the opportunity to write this work for them, and to collaborate with this truly fantastic ensemble.