Ode to the Motherland 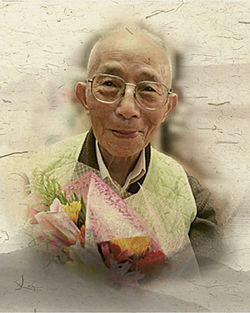 Ode to the Motherland (simplified Chinese: 歌唱祖国; traditional Chinese: 歌唱祖國; pinyin: Gēchàng Zǔguó) is a famous patriotic song of the People's Republic of China, written and music composed by Wang Xin (Chinese: 王莘; pinyin: Wáng Xīn) (October 1918–October 15, 2007) during the period immediately after the founding of the People's Republic of China (1949–1951).

On October 1, 1949, when Mao Zedong declared the founding of People's Republic of China under a sea of fluttering Five-star red flags in Tiananmen Square, he said, "Chinese people have stood up [against invasion and foreign exploitation] today!". Wang Xin started writing this song in late September 1950, shortly after he saw the sea of fluttering Five Star Red Flags at Tiananmen Square again, during the preparation period for the first National Day anniversary. The song's lyrics and its music composition were officially published on 15 September 1951 in the People's Daily.

It is the opening music of the radio programs News and newspapers Summary and National Network News of China National Radio. Also, it is the closing music of some radio channels in CNR. It is sometimes honoured as "the second national anthem" of the PRC.