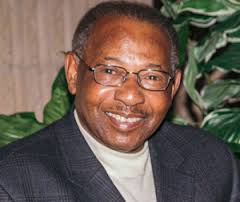 O’Neill Sanford (b. 1943) is an American conductor, educator and composer.

Mr. Sanford earned his Bachelor of Science degree in music education from Southern University, Baton Rouge, La.; Master of Music degree in education at the Vandercook College of Music, Chicago, Ill.; and studied jazz composition with composer and arranger Thad Jones at the Conservatory of Music, Copenhagen, Denmark. He received an honorary doctorate from the Conservatory of Music, Mexico City, Mexico; has served as conductor of “The Youth All-American Band” in Spain, England and Greece as well as serving as a guest conductor, clinician, and has performed on tours throughout the United States, Canada, Mexico and Europe.

He currently [2021] serves as president of the HBCU [Historically Black Colleges and Universities] National Band Directors’ Consortium, and is founder and Chief Organizer of the HBCU “Battle Fest” Battle of the Bands. He also currently [2021] serves as a visiting assistant professor of music, principal recruiter for the Department of Music and director of bands at Jackson State University.