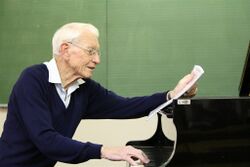 Stockton started piano lessons at age seven with his mother. He became interested in jazz at age 12 and began playing with dance bands in Johannesburg and East Rand at age 15. He was also a member of Dockey's Masterkeys, a group that specialized in band music.

After high school Stockton began an apprenticeship as a piano tuner and technician, which eventually led to his beginning a freelance career as a pianist, especially in hotels and night clubs, moving on to radio work. In 1957 he became a member of the South African Airforce Military Band in Pretoria as a bassoonist and saxophonist. The position also included writing music for wind band, making transcriptions for wind band from large scale orchestral works, and arranging light music, studying composition with Richard Cherry.

In 1975 Stockton took over the directorship of the Entertainment Corps of the SADF (South African Defence Force), and a woodwind teaching post in the instrumental teaching program in the Orange Free State. His career continued with the formation of his own big band and pioneering work in South African television.

Stockton sees arranging as the subject in which he achieved the most success in his life as a musician.