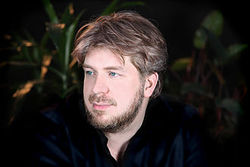 Dave Malloy (arr. by the composer)

Natasha, Pierre & The Great Comet of 1812 is a 2012 musical adaptation of Leo Tolstoy's War and Peace, with music and libretto by Dave Malloy and directed by Rachel Chavkin. It is based on Volume 2, Part 5 of War and Peace, focusing on Natasha's affair with Anatole, and Pierre's search for meaning in his life.

Natasha sings No One Else as she pines for the missing Andrey.