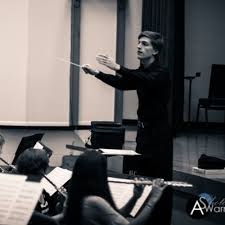 Nick Costanza (b. 30 October 1990, Sebastian, Fla.) is an American composer, arranger and conductor

Nick has many years of performing experience at the university in multiple performing ensembles, as well as multiple years of conducting experience and formal training. He has been trained in conducting since the fall semester of 2013. He has taken multiple classes on conducting techniques and instrumental conducting under Dr. Scott Tobias, former director of bands at UCF. He has also served as both assistant and head drum major of the UCF Marching Knights.

Costanza's music is primarily influenced by the sights and sounds of his childhood and life growing up, from catchy video game tunes to epic symphonic works; from grandiose film soundtracks to the stylish bounces and grooves of jazz. His original music has the fingerprints of all these styles, and he has written for a multitude of different ensembles, small and large, to incorporate his experiences into his modern instrumental music.