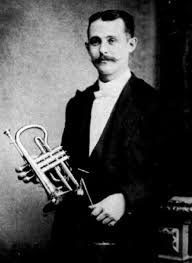 This delightful 6/8 march classic features rollicking melodies and one of the most famous march trios of all time.

This march has been Hall's most popular march for several years. It was dedicated to John Behr, assistant director of the famous Germania Band of Boston, and was premiered by Hall's own Military Band at the laying of the cornerstone for the new city hall in Waterville, Maine, in 1901. It was recorded some time later by the Pryor Band for the Victor Recording Company. The New Colonial March has been performed for military reviews and concerts in England for so many years that it is often mistaken for an English march.