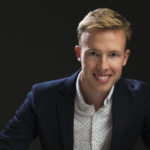 Transcribed for concert band in 2013, Neon Nights for Orchestra has been performed by ensembles nationwide, from New World Symphony in South Beach, Miami and the Indianapolis Symphony Orchestra to New Jersey's Symphony in C and the USC Thornton Symphony in Los Angeles.

I have always been enamored by the hot, vivid glow of neon lights, particularly those found in Las Vegas and in the South Beach neighborhood of Miami, Florida. The dazzlingly bright element neon, often housed in a variety of colorful, quirky-shaped tubes, proved to be an irresistible subject for a musical composition.

In this ten-minute orchestral showpiece, the listener will be taken on an ever-changing journey through a shimmering, cosmopolitan sound world. The vast majority of the piece is based off just two compositional elements -- a bright, whimsical melody and an angular ostinato figure. These two motivic ideas return again and again, though they are constantly portrayed in different contexts—often they are bold and bright, at other times cool and mellow.

Although Neon Nights does not adhere to a specific storyline or narrative, I did at times have specific images and moods in mind. For example, at the onset of the slower middle section, the atmosphere instantly becomes floaty and diaphanous, with sliding gestures and amorphous sounds; here, one might easily imagine being encapsulated within a tube filled with hot neon gas. Similarly, in the last bar of the piece, a loud spark-like clap helps initiate a “smoking” fizzle, depicting a neon tube so bright and full of energy that it bursts open, spilling out its colorful contents and vanishing into the dark.