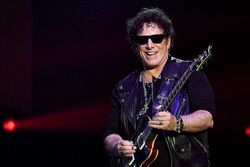 Schon's father was a big band musician, arranger, and composer, and played and taught all reed instruments with emphasis on jazz tenor saxophone; his mother was a big band singer. He is of German and Italian ancestry. Schon first picked up the guitar at "around the age of five." Schon played saxophone and oboe, and by the age of 12 he was sitting in with his father’s big band, playing guitar. A quick learner, he joined Santana at age 17. Schon has said he was asked by Eric Clapton to join Derek and the Dominos, but that he joined Santana instead, performing on the albums Santana III and Caravanserai. Schon also played in Azteca. In 1973, he and Gregg Rolie co-founded Journey, for which he is best known.

In addition to his nine solo albums and 14 studio albums with Journey, Schon's work also includes: a pair of albums with keyboardist Jan Hammer, short-term collaborations with Sammy Hagar (HSAS and Planet Us) and Paul Rodgers, stints with Bad English (a supergroup that featured Journey's Jonathan Cain and Deen Castronovo and Cain's former Babys bandmates John Waite and Ricky Phillips) and Hardline (which also featured Castronovo).

Schon's guitar style has been described as soulful, taking inspiration from 1960s-era soul singers such as Aretha Franklin and Gladys Knight, and blending it with blues runs similar to B. B. King. He was influenced by guitarists such as Eric Clapton, Jimi Hendrix, Carlos Santana and Wes Montgomery.

Schon was inducted into the Oklahoma Music Hall of Fame on 23 August 2013 and the Rock and Roll Hall of Fame as a member of Journey on 7 April 2017.