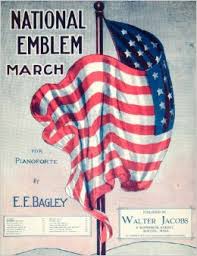 One of the most famous of American marches, National Emblem became so highly thought of that many people have assumed that it written by John Philip Sousa. In fact, members of Sousa’s own family were under the mistaken impression that Sousa composed it.

National Emblem was composed by American composer Edwin Eugene Bagley in 1905. National Emblem takes its name from our national emblem, the American flag. As a matter of fact, portions of the Star-Spangled Banner are heard in the first strain and trio of the march. Played in manuscript in 1905 by the Keene Band, it was first published by the Walter Jacobs Company of Boston in 1906. Since then, more than 17 other band arrangements of National Emblem have been issued.

“This marvelous march never fails to lift my spirit to the loftiest heights of inner joy, outer physical exhilaration, and ultimate personal fulfillment. On some occasions I have felt that knowing it, loving it -- being able to listen to it any time being played by the band in my head -- was my whole reason to be alive. It’s just my march, and I began to teach it to myself by marching my way to high school while whistling or singing it, totally oblivious of what I am sure were quizzical and suspicious glances from people I encountered en route! ... It is a march for marching; sit-down performances of it should continue to march, for that is its heritage — music for the feet, not for the head — and it is unmistakably music for the spirit. "

National Emblem (1902) is probably Bagley’s most prominent contribution to music. Bagley composed the score during a 1902 train tour with his family band. He became frustrated with the ending, and tossed the composition in a bin. Members of the band fortunately retrieved it and secretly rehearsed the score in the baggage car. Bagley was surprised when the band informed him minutes before the next concert that they would perform it. It became the most famous of all of Bagley’s marches. Despite this, the composition did not make Bagley wealthy, as he sold the copyright for $25.

Bagley incorporates into the march the first twelve notes of The Star-Spangled Banner played by euphoniums and trombones and ingeniously disguised in duple rather than triple time. The rest of the notes are all Bagley’s, including the four short repeated A-flat major chords that lead to a statement by the low brass that is now reminiscent of the national anthem. Unusually, Bagley’s march does not incorporate either a break strain or a stinger.

“March King” John Philip Sousa declared it as one of the three finest street marches ever written, after two of his own compositions. As a national treasure, National Emblem is preserved in two early recordings made by world-class bands: Arthur Pryor’s Band (1908) and The President’s Own Marine Band (1914). Both of these recordings may be heard on the Library of Congress’ National Jukebox.