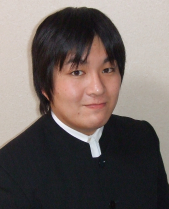 Naoya Wada (b. 6 June 1986, Fukuoka, Japan) began composing music at age 11, is a self-taught pianist, and completed his first band composition at age 15. In 2009, he earned a degree from the Toho College of Music, where he was a student of Jun Nagao.

His works have been performed in many countries and have been recorded on CD’s by many bands in worldwide, including the United States, Japan, Germany, and Belgium. In 2009, he received the 42nd Kitakyushu Cultural Award for his meritorious deeds.