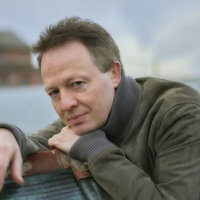 Naohiro Tsuken (b. 1950, Naha, Okinawa) is a Japanese trumpeter, educator and composer.

The youngest of seven children, Naohiro's experience playing music began on percussion in a drum and fife corps in the fifth grade. In junior high school he began trumpet. In the Shuri High School Band, he served not only as a trumpeter but also as a captain and an arranger. In his last year in high school, he experienced his first solo competition.

In 1968, Tsuken left Okinawa and entered Kunitachi College of Music in Tokyo. There, he studied trumpet from Genzo Kitamura, then principal trumpet in NHK Symphony Orchestra. Meanwhile, his fundamental compositional skills had been built not at college but in Japan Shinsei Symphony Orchestra for which he had played since its establishment in 1969. Three years later, he joined NHK Symphony Orchestra as principal trumpet, where he played until his retirement in 2010. Besides playing in orchestras, Tsuken joined the Tokyo Brass Ensemble as an original member in October 1974. He also established trumpet quintet The Trumpets 5 in November 1987.

In 1983, Naohiro won a scholarship from the Agency for Cultural Affairs and went to Munich, Germany, where he studied with Paul Lachenmeier, principal trumpet in the Bavarian State Opera, for one year.

His enthusiasm for trumpet extends not only to playing but also to teaching. He has mainly taught at the Tokyo College of Music as an associate professor. Also, he teaches at Senzoku Gakuen College of Music and Kunitachi College of Music as an associate professor. As an instructor, he teaches at Shobi University as well. Besides teaching in the Tokyo area, he has put a great effort into teaching in his home, Okinawa. Other than teaching at Okinawa Prefectural University of Arts as an instructor, he has hosted an annual trumpet camp in Okinawa since 1986.

While enjoying his successful career as a trumpeter, Tsuken started to compose in 1994. His first composition, Quatre Variations sur un Thème de SE16GAN, was written for trumpet quintet. He named this piece after Marcel Bitsch’s piece for trumpet and piano, Quatre Variations sur un Thème de Domenico Scarlatti, and he came up with the idea of his pseudonym from this composer: combination of Marcel Bitsch and Kentsu as an anagram of Tsuken: Marcel Kentsubitsch.

Tsuken mainly composes for solo instrument with piano, chamber ensemble, and concerto. Because he is a trumpeter, he composes most works for trumpet, but he also writes for other instruments, especially for winds.