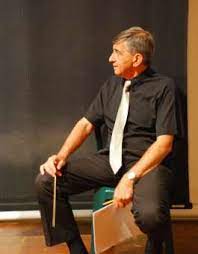 Nachman Yariv (b. Argentina ) is an Israeli tubist, composer and conductor of Argentine origin.

Yariv began his musical education with piano lessons at the age of six. In 1957 his family left for Israel and he completed his studies at the Rubin Academy of Music, Tel Aviv.

He joined the military band of the Israel Defense Forces where he played tuba and became second conductor. After his army days he worked in the theater world and conducted various musical shows.

In the last twenty years he became more and more active in music education. Yariv is the conductor of the Youth Harmony Lod, the National Kibbutz Youth Harmony Orchestra and the Kfar Saba Community Band. He is also a consultant to the Rothschild Foundation's Israeli Youth Music Project.