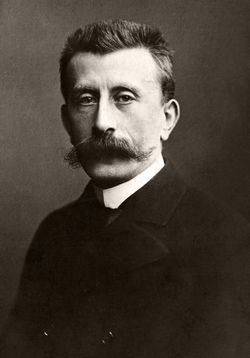 Moszkowski was born into a wealthy Polish-Jewish family whose parents had come to Breslau from Pilica, near Zawiercie, in 1854. He was an ardent Jew at a time when many Jews downplayed their Jewishness. He showed early talent from a very tender age, beginning his musical training at home until 1865, when his family moved to Dresden. There he continued his piano studies at the conservatory. He moved to Berlin in 1869 to continue his studies first at the Julius Stern Conservatory, where he studied piano with Eduard Franck and composition with Friedrich Kiel, and then at Theodor Kullak's Neue Akademie der Tonkunst, where he studied composition with Richard Wüerst and orchestration with Heinrich Dorn. In 1871 he accepted Kullak's offer to become a teacher in his academy; as he was also a more than competent violinist, he sometimes played first violin in the orchestra.

In 1873 Moszkowski made his first successful appearance as a pianist, and soon began touring the nearby cities in order to gain experience and establish his reputation. Two years later he was already playing his piano concerto on two pianos with Franz Liszt at a matinée before a selected audience invited by Liszt himself.

Retaining his post as a teacher at the Berlin conservatory from 1875, he had among his pupils Frank Damrosch, Joaquín Nin, Ernest Schelling, Joaquín Turina and Johanna Wenzel. Moszkowski then travelled successfully throughout Europe with the reputation of being an exceptional concert pianist and brilliant composer, having also gained some recognition as a conductor. In 1884 Moszkowski married the younger sister of pianist and composer Cécile Chaminade, Henriette Chaminade.

By the mid-1880s, Moszkowski began suffering from a neurological problem in his arm and gradually diminished his recital activity in favor of composing, teaching and conducting. In 1887 he was invited to London where he had the chance to introduce many of his orchestral pieces. There he was awarded honorary membership of the Royal Philharmonic Society.

In 1897, famous and wealthy, Moszkowski moved to Paris, where he was frequently sought after as a teacher, and was always generous in investing his time on aspiring musicians. Among his Parisian students were Vlado Perlemuter, Thomas Beecham, Wanda Landowska, and Gaby Casadesus. In 1899 the Berlin Academy elected him a member.

In 1908, by the age of 54, Moszkowski had already become a recluse as he began to suffer from poor health. His popularity began to fade and his career slowly went into decline. He stopped taking composition pupils because "they wanted to write like artistic madmen such as Scriabin, Schoenberg, Debussy, Satie ...".

His last years he spent in poverty. On 21 December 1924, when he was ill and heavily in debt, his friends and admirers arranged a grand testimonial concert on his behalf at Carnegie Hall, involving 15 grand pianos on stage. Ossip Gabrilowitsch, Percy Aldridge Grainger, Josef Lhévinne, Elly Ney, Wilhelm Backhaus and Harold Bauer were among the performers, and Frank Damrosch conducted.