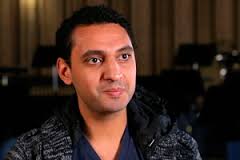 Fairouz began composing at an early age and studied at the New England Conservatory of Music and the Curtis Institute of Music. His teachers included Gunther Schuller, Halim El-Dabh, György Ligeti and John Heiss.

Describing himself as “obsessed with text,” Fairouz has great interest in vocal music and has composed operas, song cycles, and many other songs. Some of his instrumental music has also been inspired by literary sources, such as his symphonies. Symphony No. 1, “Symphonic Aphorisms” (2007), was influenced by various authors and images, and Symphony No. 3, “Poems and Prayers” (2010) includes Arabic, Aramaic, and Hebrew texts and explores the Middle East conflict. His first three symphonies are for orchestra -- the third also includes vocal soloists and chorus -- but Symphony No. 4 “In the Shadow of No Towers” (2012) is Fairouz’s first major piece for wind ensemble. It is in fulfillment of a commission from Reach Out Kansas, Inc. for the University of Kansas Wind Ensemble, which premiered it at Carnegie Hall in March 2013.

Mr. Fairouz has written vocal music, operas, symphonies, concerti and chamber and solo music. He is one of the most frequently performed composers of his generation and has been described as an important new artistic voice.