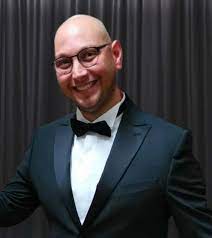 Caruso began studying the clarinet under the guidance of his father Giuseppe until he completed a diploma at the “A. Corelli ” Conservatory of Messina in 2004. In 2007 he completed the II level Academic Biennium in clarinet with full marks at the“ A. Corelli ”of Messina under the guidance of prof. Carmelo Crisafulli. In 2009 he obtained the II level Academic Diploma for the training of musical instrument teachers at the “C. Monteverdi ”of Cremona. In 2017 Caruso graduated with a bachelor’s degree with honors in composition and conducting for wind orchestra at the Conservatory of Music “A. Corelli” in Messina under the guidance of Lorenzo Della Fonte. He took part in advanced courses with John Corigliano (USA); (Yasuhide Ito (Japan) and Eugene Migliaro Corporon (USA).

As a conductor he won numerous awards in national and international competitions for concert bands. In May 2019 he was the only Italian to pass the selections at the International Competition for Wind Orchestra Conductors at the Deutsches Musikfest in Osnabruck (Germany).

Mr. Caruso currently [2022] holds the position of clarinet and wind ensemble teacher at the High School of Music “G. Verga “ in Modica, as conductor of the school orchestras (symphony orchestra and wind orchestra). He has conducted numerous concerts including in important musical seasons: Ibla Classica International and the Garbaldi Theater Foundation; with the high school symphonic band, he won numerous awards in national and international competitions, most recently the first prize at the National Competition La Bacchetta d'Oro at Frosinone in May 2019.