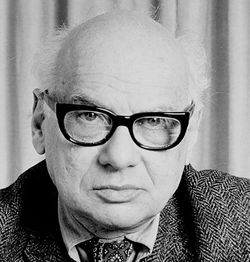 Babbitt was raised in Jackson, Miss., and began studying the violin when he was four but soon switched to clarinet and saxophone. Early in his life he was attracted to jazz and theater music, and "played in every pit-orchestra that came to town". Babbitt was making his own arrangements of popular songs by age seven, "wrote a lot of pop tunes for school productions" , and won a local songwriting contest when he was 13.

Babbitt's father was a mathematician, and Babbitt intended to study mathematics when he entered the University of Pennsylvania in 1931. But he soon transferred to New York University, where he studied music with Philip James and Marion Bauer. There he became interested in the music of the composers of the Second Viennese School and wrote articles on twelve-tone music, including the first description of combinatoriality and a serial "time-point" technique. After receiving his bachelor of arts degree from New York University College of Arts & Science in 1935 with Phi Beta Kappa honors, he studied under Roger Sessions, first privately and then at Princeton University. He joined Princeton's music faculty in 1938 and received one of Princeton's first Master of Fine Arts degrees in 1942. During the Second World War, Babbitt divided his time between mathematical research in Washington, D.C., and Princeton, where he was a member of the mathematics faculty from 1943 to 1945.

In 1947, Babbitt wrote his Three Compositions for Piano, which are the earliest examples of total serialization in music. In 1958, Babbitt achieved unsought notoriety through an article in the popular magazine High Fidelity. His title for the article, The Composer as Specialist, was changed, without his knowledge or consent, to Who Cares if You Listen?

Babbitt later became interested in electronic music. He was hired by RCA as consultant composer to work with their RCA Mark II Synthesizer, and in 1961 produced his Composition for Synthesizer. Many other composers regarded electronic instruments as a way of producing new timbres. Babbitt was much more interested in the rhythmic precision he could achieve using the Mark II synthesizer, a sort of precision regarded at the time as impossible in performance by actual, live, human performers.

He was a founder and member of the Committee of Direction for the Electronic Music Center of Columbia-Princeton Universities and a member of the Editorial Board of Perspectives of New Music. The recipient of numerous honors, commissions, and awards, including a MacArthur Fellowship and a Pulitzer Prize Citation for his "life's work as a distinguished and seminal American composer," Babbitt was a member of the American Academy of Arts and Letters and a Fellow of the American Academy of Arts and Sciences.