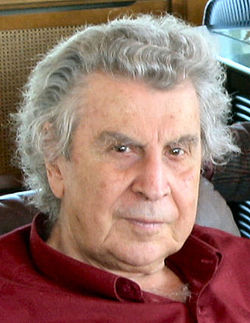 Theodorakis spent his childhood years in different provincial Greek cities such as Mytilene, Cephallonia, Patras, Pyrgos, and Tripoli. He was raised with Greek folk music and was influenced by Byzantine liturgy; as a child he had already talked about becoming a composer. He taught himself to write his first songs without access to musical instruments. He took his first music lessons in Patras and Pyrgos, and in Tripoli, Peloponnese, he gave his first concert at the age of seventeen.

He went to Athens in 1943, and became a member of a Reserve Unit of ELAS, and led a troop in the fight against the British and the Greek right in the Dekemvriana. During the Greek Civil War he was arrested, sent into exile on the island of Icaria and then deported to the island of Makronisos, where he was tortured and twice buried alive.

During the periods when he was not obliged to hide, not exiled or jailed, he studied from 1943 to 1950 at the Athens Conservatoire under Filoktitis Economidis. In 1950, he finished his studies and took his last two exams "with flying colours". He went to Crete, where he became the "head of the Chania Music School" and founded his first orchestra. At this time he ended what he has called the first period of his musical writing.

In 1954 he travelled with his young wife Myrto Altinoglou to Paris where he entered the Conservatory and studied musical analysis under Olivier Messiaen and conducting under Eugene Bigot. His time in Paris, 1954–1959, was his second period of musical writing.

In 1960, Theodorakis returned to Greece and his roots in genuine Greek music: With his song cycle Epitaphios he started the third period of his composing and contributed to a cultural revolution in his country. His most significant and influential works are based on Greek and world poetry – Epiphania (Giorgos Seferis), Little Kyklades (Odysseas Elytis), Axion Esti (Odysseas Elytis), Mauthausen (Iakovos Kambanellis), Romiossini (Yannis Ritsos), and Romancero Gitano (Federico García Lorca) – he attempted to give back to Greek music a dignity which in his perception it had lost.

He scored for the films Zorba the Greek (1964), Z (1969), and Serpico (1973). He composed the Mauthausen Trilogy also known as The Ballad of Mauthausen, which has been described as the "most beautiful musical work ever written about the Holocaust" and possibly his best work.

Politically, he was associated with the left because of his long-standing ties to the Communist Party of Greece. He consistently opposed oppressive regimes and was a key voice against the 1967–74 Greek junta, which imprisoned him. He was viewed as Greece's best-known living composer before his death in 2021. He was awarded the Lenin Peace Prize.