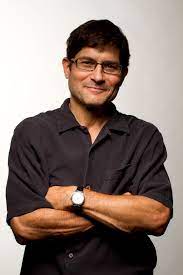 Mike Holober (b. 21 April 1957) is an American jazz pianist, composer, arranger, and educator.

Trained as a classical pianist and conductor, Holober moved to New York in 1986, and worked as a composer and sideman pianist. After working with baritone saxophonist Nick Brignola in the late 1990s, he formed The Mike Holober Quintet, featuring original compositions and arrangements. Holober's big band, The Gotham Jazz Orchestra, released two recordings: Thought Trains and Quake.

Mr. Holober was the musical director of the Westchester Jazz Orchestra from 2007 to 2013, a non-profit organization based in Westchester New York. Under his leadership, the organization commissioned over 140 new works for jazz orchestra. Holober has worked with several big bands in Europe, including the HR-Bigband (Frankfurt), where he served as Associate Guest Conductor from 2011-2015, and the WDR Big Band(Cologne).

Holober is a 2017-18 recipient of a Chamber Music America New Jazz Works Grant for Don’t Let Go, a song cycle in the tradition of Robert Schumann, Samuel Barber, and Ralph Vaughan Williams, and premiered at Symphony Space (The Leonard Nimoy Thalia) in June 2018. Don’t Let Go was written for Holober's octet Balancing Act.

Holober is a full professor at The City College of New York and was named the inaugural Stuart Z. Katz Professor of Humanities and the Arts in 2018. He is a five-time MacDowell Fellow, Ucross Foundation Fellow and Yaddo Guest. He also teaches composing and arranging at The Manhattan School of Music. From 2007 - 2015 he served as associate director of the BMI Jazz Composer’s Workshop.