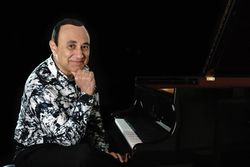 Michel Camilo (b. 4 April 1954, Santo Domingo, Dominican Republic) is a composer and pianist.

Mr. Camilo studied for 13 years at the National Conservatory, earning a degree of Professorship in Music and at the age of 16 became the youngest member of the National Symphony Orchestra of the Dominican Republic. He moved to New York in 1979 to continue his studies at Mannes and Juilliard School of Music. Since his 1985 Carnegie Hall debut he has become a prominent figure performing regularly at festivals and concert venues throughout the United States, Europe, Japan, Asia, Middle East, South America and the Caribbean.

In addition to being a composer and pianist, Camilo is a bandleader, lecturer, and visiting professor. He is a chart-topping producer; a Grammy, Latin Grammy and Emmy award winner. He is the recipient of his native country's highest civilian honors.

The artistry of Michel Camilo bridges the genres of jazz, classical, popular and world music. As a composer he flavors his tunes with the spice of Caribbean rhythms and jazz harmonies.