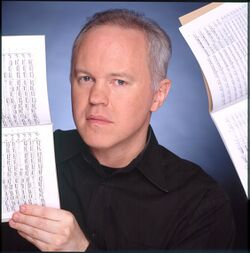 Michael Torke (b. 22 September 1961, Milwaukee, Wisc.) is an American composer who writes music influenced by jazz and minimalism.

With his two best-known early pieces, Ecstatic Orange and Yellow Pages, written in 1985 while still a composition student at Yale, Michael Torke had a large influence in post-minimalism, a music that utilizes the repetitive structures of a previous generation to incorporate musical techniques from both the classical tradition and the contemporary pop world. At 23, Torke cut short his graduate study to begin his professional career in New York City, where he was soon signed by Boosey and Hawkes (the publisher of Stravinsky and Copland), became an exclusive recording artist with Argo/Decca Records, and began his five-year collaboration with Peter Martins and the New York City Ballet.

Highlights since then include: Color Music (1985–89), a series of orchestral pieces that each explore a single, specific color; Javelin, recorded both for Argo and for John William’s Summon the Heroes, the official 1996 Olympics album; Four Seasons, a 65-minute oratorio commissioned by the Walt Disney Company to celebrate the millennium and premiered by Kurt Masur and the New York Philharmonic; Strawberry Fields, whose “Great Performances” broadcast was nominated for an Emmy Award; and two evening-length story ballets, The Contract, and An Italian Straw Hat, for James Kudelka and the National Ballet of Canada.

In 1998 Torke was appointed Associate Composer of the Royal Scottish National Orchestra. Naxos released an album including Rapture, his percussion concerto, and An American Abroad, a tone poem, both of which were commissioned and performed by the RSNO. In 2003 Torke founded Ecstatic Records and acquired the rights to re-issue the Decca/Argo catalog of his works. The boxed set of the complete recordings was selected by The New York Times as one of the top Classical albums of the year. Two new releases occurred in 2005: Strawberry Fields and An Italian Straw Hat.