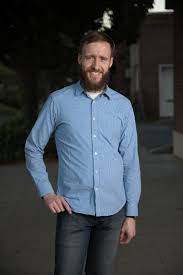 Michael Goodman (b.1988, Lansing, Mich.) is an American composer, arts administrator, and euphoniumist.

Goodman views composition as a communicative tool that enhances his musical and philosophical ideas. His music stems from personal, neurodivergent experiences of his own or close friends. He creates music that is organic by including acting, speech, humor, and drama. He is also known to combine various genres such as rock, jazz, and classical music to create a musical space that is uniquely expressive and authentic.