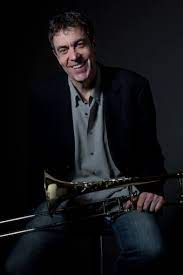 Mr. Davis's early musical studies included the piano, drums, tuba, baritone horn and electric bass. Settling on the trombone in high school, he quickly found his stride and received principal chairs in many all-state honor groups. His collegiate career commenced at the Eastman School of Music in the fall of 1979.

In 1983, Davis signed on with the Buddy Rich Band. His two-year stint with the band forged musical and personal friendships that continue to this day and presented him with “the best graduate degree anyone could possibly hope for.” Michael’s freelance career in New York City began in earnest in 1986, and before long he was one of the top trombonists around. As testimony to his versatility and wide regard, the list of jazz and pop luminaries he has worked with includes: James Taylor, Michael Jackson, Bob Dylan, Aerosmith, Tony Bennett, Jay Z, Sarah Vaughan, Sting, Beck, Branford Marsalis, Peter Gabriel, Sheryl Crow, Lyle Lovett, Bob Mintzer, Paul Simon, David Sanborn, Terence Blanchard and scores of others.

Michael Davis has enjoyed a diverse and acclaimed career. Widely known as the trombonist for five world tours with the Rolling Stones, he toured and recorded extensively with Frank Sinatra, has released 11 CDs as a solo artist, composed over 150 works, authored a dozen books for brass players of all levels, and appeared on over 500 CDs, television themes and motion picture soundtracks. He is the founder, creator and president of Hip-Bone Music, Inc. In 2011, the S.E. Shires Company released the Michael Davis signature model trombone and followed that in 2014 with the release of the Michael Davis+ trombone.

In the field of music education, Davis has served as a guest artist and clinician around the world, while also authoring a number of instructional books and arrangements for musicians of all ages and abilities. A multiple recipient of awards from the National Endowment for the Arts, he maintains his own jazz groups and projects through Hip-Bone Music.

Currently [2022], Davis continues his busy schedule as an in-demand New York freelance musician with a steady diet of Broadway shows, studio recording work and live concerts. He travels extensively as a solo artist guesting with professional, college and high school bands around the world, while also continuing to build his publishing company into one of the preeminent purveyors of the highest quality music for brass.