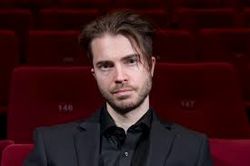 Metalfare for Symphony Orchestra was written during a one-month period in November and December 2010. The piece was the first prize winner in the Helsinki University Symphony Orchestra’s Fanfare Competition to celebrate its 85th anniversary and was premiered by that ensemble on April 16, 2011 under the direction of conductor Mikk Murdvee.

The title of the work is a portmanteau of the words “metal music” and “fanfare.” Hylkilä was inspired by heavy metal music while writing the piece and felt that this influence was strong enough to warrant incorporation into the title.

Metalfare lasts roughly a minute and a half. It opens with a burst of energy that does not subside. The opening timpani roll and sustained low winds give way to a brilliant fanfare theme stated first in brass, then woodwinds and finally in the full ensemble. A brief, lyrical second theme follows before giving way to the original fanfare theme, stated in the full ensemble. The brief piece comes to a dramatic conclusion on a tutti E-major chord.