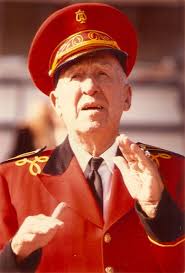 Merle Evans's was a foreman in a coal mine. He had six siblings. Evans had an early job selling newspapers on corners. He used his cornet to call attention to the headlines. After holding several other jobs, Evans left home and joined the S.W. Brundage Carnival Company as a cornet player. Evans held several other jobs, including as a band director for the Miller Brothers 101 Ranch Wild West Show featuring Buffalo Bill. He was hired as the band director for the newly merged Ringling Bros. and Barnum & Bailey Circus in 1919. Evans held this job for fifty years, until his retirement in 1969. He only missed performances due to a musicians union strike in 1942 and the death of his first wife.

On July 6, 1944, a fire broke out during a Ringling Bros. and Barnum and Bailey Circus performance. The fire killed around 168 people. The quick reaction of Merle Evans and his band is credited with saving thousands of lives. When Evans saw the fire, he signaled that the band should play John Philip Sousa’s Stars and Stripes Forever, used in the circus as the “disaster march,” indicating an emergency. The performers heard the music and immediately began the evacuation. Accounts state that Evans and his band played until it was no longer safe to do so, and then evacuated and reformed outside, where their playing helped to pace the evacuation and steady the crowd.

A scholarship at the Indiana University Bloomington Jacobs School of Music is named after Evans. The Midwest Clinic awarded Evans its Medal of Honor in 1966. Windjammers Unlimited credits Evans with its early success as an organization, and he is honored in their Hall of Fame.

He was known as the "Toscanini of the Big Top." Evans was inducted into the American Bandmasters Association in 1947 and the International Circus Hall of Fame in 1975.