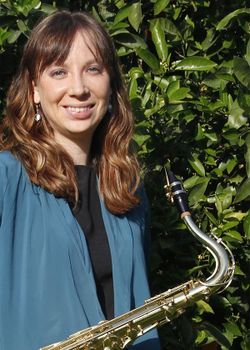 Mercury’s March depicts imaginary scenes in a day of the life of Mercury, the god of trade and messenger of the gods. First, the low brass introduce a sly yet bold mantra that depicts Mercury boldly marching through town. During his patrol, he flaunts his caduceus, a wand entwined with two serpents that has magical powers to put mortals to sleep, raise the dead, and turn anything it touches into gold.

Known for trickery, his antics can be heard through glissandi in the trombones as well as a second melody that slithers and wanders. This second melody portrays Mercury’s strength through the use of the Dorian mode. By highlighting the raised sixth scale degree, triumphant harmonies are created. As the piece progresses, customers trading and bantering with Mercury can be heard in short, accented figures that pass from one group of instruments to another. And, sometimes, clashing notes can even be heard.

Special thank you to Professor Frank Ticheli for providing the template and resources for creating adaptable works such as this one!

Full-flex Instrumentation:
This work has four parts with full-flex instrumentation. It is arranged so that any 4 instruments or groups of instruments could perform it - The minimum required is one instrument per part. For example, if only two flute and two clarinet students are present for rehearsal, all four parts (including the bass line) may be distributed to those instruments. Another scenario could be:

Flute & Oboe:
– Occasionally, there are divided notes (Ex.: Fl/Ob Part 2, m. 46). The lower notes are meant to provide alternatives to the higher ones as needed. If possible, the top note should be played.

Low Brass Part 4:
- Only one of the two octaves written need to be played. The lowest notes are for tuba, if available. If no tuba, trombones and/or baritones may play the top notes. Or a fifth part could be added by playing both octaves.

Alternative Percussion:
- I provided this part for situations where access to instruments may be limited or where a full percussion section may not be present. In these cases, this alternative part may replace the other four percussion parts. There is no specific instrument specified. Instead, it could be played by just about anything! It could be a snare drum, hands on a desk, or even homemade percussion. Creative doublings with different instruments (or like instruments) are also possibilities.