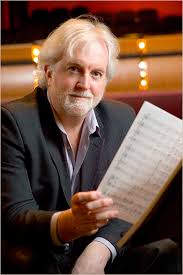 This eighteen-minute work was composed largely during calendar year 2018. When Darryl Bott asked me to write an ambitious work for wind ensemble, I looked through old sketches of works of mine to see if something might be usable for winds, brass and percussion. Years before, I had sketched out a first movement to my First Symphony, a work that has never been completed. I thought that this symphonic movement would propel the piece in a largely dramatic way, something that I, at least, had not heard or seen much of in wind/band literature. Although it has been evolving considerably in recent years, bands and wind ensembles traditionally explored lighter genres, polkas, marches or anthemic odes to nature or to current events. From the beginning, I wanted my wind ensemble piece to contain many moods, from pride to grief to ecstasy to drama, and even briefly to levity.

All of these emotions or states were to be united by the thought of Memorial Day: a day each year where wecelebrate our American and Allied soldiers, both those who died but also those who served and survived. Rather than center on a particular musical narrative, the music of Memorial Day transitions from one state to the next, and I have attempted to build drama with the use of very simple themes and motives, which continually return, somewhat different each time they are stated.

After the violence of battle and death comes the solitude of peace and memory. We remember those who we lost from our families and our friends. My two uncles, two older brothers of my mother, Kay Baker, were both killed in action in World War Two. John Drayton Baker was a pilot who went missing in action and presumed dead in the Battle of the Coral Sea in the Pacific in May 1942. My other uncle, Robert Livingston Baker (after whom I was named ), was killed in action at the Battle of the Bulge in Belgium during his freshman year at Princeton University, January 1945. My own father ran away from home at 17, lied about his age in order to enlist, wanting to be a gunner on a B-19 Bomber (a position that had an 80%-90% fatality rate). The night before he was shipped out for gunnery training, they found out he was a good typist, and apparently they needed typists more than B-19 gunners! So he spent the war in London working for the Eighth Army Air Corps. There are so many remembrances of sacrifice, bravery, honor and heartache that we reflect on this day, Memorial Day. I hope I have provided some sort of meaningful musical depiction of the intense human emotions that stay with us each year on Memorial Day.