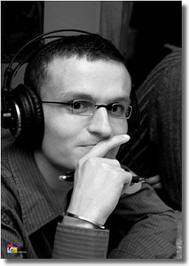 Maxime Aulio (born in Chartres, France, in 1980) is a French composer. He began his studies of organ at a young age but soon took interest in percussion, harpsichord, then horn, the instrument he studied at the Conservatoire National de Région of Toulouse. He studied at the Lemmens Conservatory in Leuven, Belgium, where he graduated in 2006 with two master's, in composition (and fugue) and conducting. During the summer of 1999, he composed his first work for concert band, Prophéties, premiered by the band of the Conservatoire National de Région of Toulouse. One year later, he wrote Les Voyages de Gulliver, a suite in four movements for concert band (De Haske Publications).

Maxime Aulio is a self-taught and versatile composer. His list of works includes items for soloist(s) and wind orchestra [Il Signore Fagotto (2002) for bassoon ; Bilbo the Hobbit (2002) for horn ; Montségur, La Tragédie Cathare (2003) for trombone ; Marsyas (2005) for flute and harp ; The Butterfly that Stamped (2006) for baritone saxophone ; Libertalia (2007) for euphonium ; etc.] as well as compositions for chamber ensembles [Arachnophobie (2000) for saxophone quartet ; Phaethon (2008) for bass trombone and ensemble, etc.], for symphonic orchestra [Elégie et Elévation (2007) for trombone and orchestra ; etc.], or film music [vie de couple directed by Jean Lenormand (2004)].

The composer's interest in wind orchestra history in France, especially its military past, and his advocacy for militant action around it, led him to begin a career as military conductor in French army in 2008. In 2012, he participated in a masterclass for conducting contemporary music ensembles, given by Jean Deroyer and Ensemble Court-Circuit.