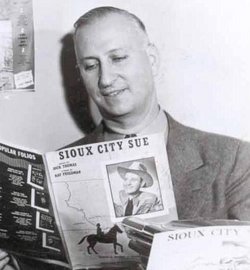 Freedman became a radio announcer, writer and entertainer, before joining the staff of a music publishing company. He joined ASCAP in 1942. One of his first successes as a writer, credited as Ray Freedman, was Sioux City Sue, a hit record for the song's co-writer Dick Thomas in 1945, and later recorded by many others. His other successful songs, several of which were written with Morty Berk and Frank Capano, included Dreamy Old New England Moon, Heartbreaker (1947), and Tea Leaves (1948).

Freedman co-wrote the words and music to the landmark song Rock Around the Clock with "Jimmy DeKnight", a pseudonym used by composer, music publisher, and promoter James E. Myers. The song was copyrighted on March 31, 1953, although there is evidence that it was written in 1952. There are also claims that Freedman wrote the song in its entirety.