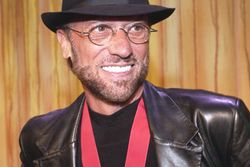 Gibb's earliest musical influences included the Everly Brothers, Cliff Richard, and Paul Anka; the Mills Brothers and the Beatles were significant later influences. Gibb started his music career in 1955 in Manchester, England, joining the skiffle-rock and roll group the Rattlesnakes, which later evolved into the Bee Gees in 1958 when they moved to Australia. They returned to England, where they achieved worldwide fame.

Although his elder brother Barry Gibb and fraternal twin brother Robin Gibb were the group's main lead singers, most of their albums included at least one or two songs featuring Maurice's lead vocals, including Lay It on Me, Country Woman and On Time. The Bee Gees were one of the most successful rock-pop groups of all time. In 2002, the Bee Gees were appointed as CBEs for their "contribution to music". Following Gibb's death in 2003, his son collected his award at Buckingham Palace in 2004.

When Bee Gees was temporarily broken up in 1969, Maurice released his first solo single, Railroad, but his first solo album, The Loner, has never been released.