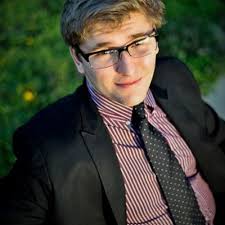 Matt Magerkurth (b. 1995) is an American composer and cellist.

Magerkurth’s music has been performed in many parts of the U.S. by ensembles such as Loadbang, Exit 128 Chamber Orchestra, the American Creators Ensemble, the Milna Ensemble, The University of Tulsa String Quartet, members of the Beo Quartet, and Ascending Duo. He has been a fellow of music seminars, including the Oregon Bach Festival, the Milna Ensemble of the upBeat International Summer School in Music and the University of Nebraska-Lincoln Chamber Music Institute. At the Gilcrease Museum of American Art he recently organized the Landscapes and Soundscapes Installation of Composers, featuring a walk-through installation of pieces written by composers in response to works at the museum. Other performances have taken place through the University of Missouri Columbia’s Creative Improvisation Ensemble, The Oklahoma Center for the Humanities, Tulsa’s Music at the Mansion series, and at Tulsa Living Arts.

As an avid performer, Magerkurth performs in a diverse number of genres, including new chamber music, film scores, bluegrass, and Jazz. He often joins the Ascending Duo to form a new music piano trio, having performed in venues like NYC’s Firehouse Space and Grove in Indianapolis. He has also premiered numerous pieces with the American Creators Ensemble.