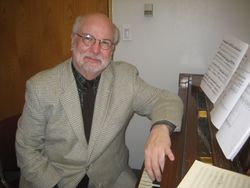 He worked at Atlantic Christian College, now Barton College, (1973–1977), at the Peabody College in Nashville, Tennessee (1977–1979), from 1980 to 1983 at Southern Methodist University in Dallas, from 1983 to 1989 at Tennessee Tech University, and from 1989 to 1998 he served as dean of the school of music and held the Yeager Endowed Professorship of Composition at Baylor University, at which point he became dean of the Weitzenhoffer Family College of Fine Arts at the University of Oklahoma (1998-2005). He is currently professor of music at the University of Oklahoma.

His music has been performed widely in the United States, Europe, Canada, Mexico, South America and Japan. In addition, his orchestral works have been performed by the symphonies of Atlanta, Dallas, St. Louis, Colorado, Honolulu, the Cabrillo Festival, & recorded by the Czech Philharmonic Symphony. He has multiple awards from ASCAP, Meet the Composer, the Charles Ives Center for American Music, and held a year-long fellowship in orchestral composition awarded by the Tennessee Arts Commission.