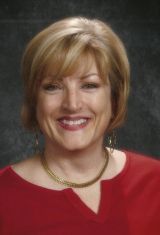 Marta Keen Thompson (b. 1953) is an American composer and educator.

After completing a B.A. in English and music at Texas Christian University in 1975, she completed K-12 vocal music certification at Portland State University in Portland, Oregon, and began teaching elementary music and English in 1979. During her 16 years as a music educator for grades K-12, she completed a master's degree in educational media, wrote and directed children's musicals and performed as a pianist and singer throughout the Seattle, Wash. and Portland, Ore. areas. She received a graduate assistantship to Pacific Lutheran University, where she sang with the Choir of the West and studied choral composition. Ms. Thompson has written and published children's songs and choral works since 1982.

In 1996, Marta moved to Las Vegas, where she began a second career as elementary school librarian. Composition has taken a back seat to motherhood. Marta continues to arrange for and accompany church and community choral groups in the Las Vegas area. A lifelong student of Maria Montessori’s philosophy and methods as well as the music methods and philosophies of Orff, Suzuki and Kodaly, Ms. Keen believes in the power of music to integrate and enhance all disciplines and inspire the whole child.