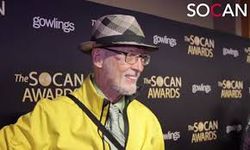 Dennis Edmonton (b. 21 April 1943, Oshawa, Ontario, Canada), also known by the stage name Mars Bonfire, is a Canadian rock musician and songwriter, best known for writing the hit song Born to be Wild for Steppenwolf.

Born Dennis Eugene McCrohan, he and his brother Jerry changed their surnames to Edmonton in the early 1960s. The brothers were part of a band called The Sparrows which later evolved into Steppenwolf.

Bonfire embarked on a solo career while his brother Jerry became the drummer for Steppenwolf. After leaving the band, he often collaborated with Kim Fowley, co-writing and recording on the recordings of Fowley and artists associated with Fowley.

On June 22, 2015, Bonfire was awarded the Cultural Impact Award by SOCAN at the 2015 SOCAN Awards in Toronto for the song Born to be Wild.