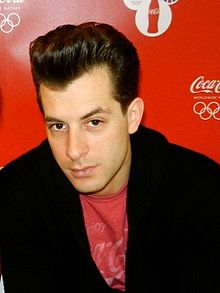 Ronson – along with his mother, step-father and twin sisters – moved to New York City when he was eight years of age. Living on the Upper West Side of Manhattan, he counted Sean Lennon – son of John Lennon and Yoko Ono – amongst his childhood friends.[15] Ronson attended high school at the private Collegiate School in Manhattan before attending Vassar College and then New York University.

While attending New York University, Ronson became a regular at downtown hip hop spots and made his name as a DJ on the New York club scene in 1993. He soon became known for his diverse, genre-spanning selection. Influenced by funk, the hip hop scene of New York and the more rock influence of the UK, he attracted a wider audience. He was soon a popular and sought after DJ in New York City, frequently booked for high profile events and private parties.

His second album, Version, reached number two in the UK and included three top 10 singles. This success won him a Brit Award for Best British Male Solo Artist in 2008. His third studio album, Record Collection, was released on 27 September 2010, peaking at number two in the UK.

In 2014, Ronson achieved his first UK and US number one single with Uptown Funk!, which featured vocals from Bruno Mars. The song earned Ronson the 2015 Brit Award for British Single of the Year, and the 2016 Grammy Award for Record of the Year and Grammy Award for Best Pop Duo/Group Performance.

Ronson produced Adele's first album, 19. He received acclaim for producing Amy Winehouse's album Back to Black, for which he won the Grammy Awards for Producer of the Year, Non-Classical, Best Pop Vocal Album and Record of the Year for the single Rehab.