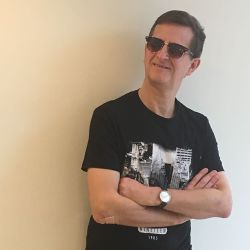 Mark Glentworth (b. 1960, United Kingdom) is a British composer and percussionist.

At the age of 16 Glentworth was one of the youngest students to study percussion at the Royal Northern College of Music. After graduating he started working in London as a freelance percussionist in all styles of music.

Glentworth's composition work has covered a very wide spectrum of music ranging from commercial song writing through to orchestral composition and opera. He has worked with Steven Berkoff, Sir John Gielgud, Sir Peter Maxwell Davis’s Fires Of London, The BBC Symphony Orchestra and The London Sinfonietta.

He has been working with Steven Berkoff since 1983. Their collaborations include productions of West, Greek, and Metamorphosis., among others One of their most notable productions was the stage version of the classic film On the Water Front.