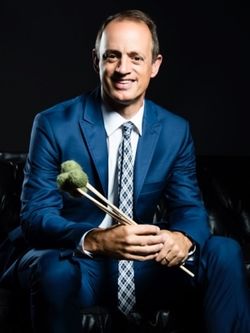 Mark Ford (b. 1958) is an American composer, educator and percussionist.

Mark Ford is the coordinator of percussion activities at The University of North Texas in Denton, Texas, and a Past President of the Percussive Arts Society. He is a marimba specialist and the coordinator of one of the largest percussion programs in the United States at UNT. Ford is an active performer on the marimba, and he has been featured throughout the United States at universities and music conferences. He also regularly performs at international music festival in South America, Asia, Australia, and Europe.

With several marimba and percussion CDs to his credit, Mark Ford's recordings have further established his dedication to excellence in music. Ford's solo marimba CDs Motion Beyond and Polaris have received outstanding reviews including The Instrumentalist, which stated Ford's performance is "superb and his compositional style is equally outstanding." He has also recorded two DVDs and a CD with Japanese virtuoso marimbist Keiko Abe and the UNT Wind Symphony.

As a composer, Mark Ford has written several popular works for solo marimba and percussion ensemble, including Head Talk, Polaris, Kingdom Lore Fabfare, Stubernic, Afta-Stuba!, Heads Up!, and The Surface of Life. His compositions have been performed at universities and concert halls through the world and also featured on National Public Radio. Ford is also the author of Marimba: Technique Through Music, a four-mallet marimba method book published by Innovative Percussion, Inc. Mark Ford's latest composition, Marimba Heritage, is a mallet ensemble showcase. The work is built on motives of numerous marimba solos and is designed to honor the tradition of solo marimba performance.