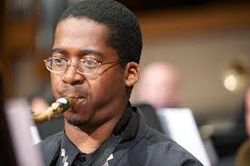 Dr. Wilcher grew up in the suburbs of Moreno Valley, California, listening to soul, R&B, and hip-hop. He began showing interest in jazz at age ten after hearing Miles Davis’s Birth of the Cool. However, jazz wouldn’t become his focus until he entered college in 2003, where he developed a passion for composition and decided to pursue a career in music.

Wilcher has attended and received multiple degrees from both Riverside City College and the University of Texas-Austin. Both schools frequently feature his compositions in concert. Most recently, Marcus was a finalist in the 2013 ArtEZ composition competition -- part of the Grolsch International Jazz Festival -- and received commissions from the New York Youth Symphony’s First Music program for both the 2013-14 and 2014-15 concert seasons.