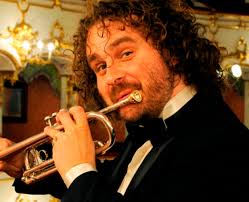 Marco Pierobon (b. 1975, Italy) is an Italian trumpeter, educator and composer.

Pierobon has won first prize in international competitions of Passau (Germany), Imperia and Aqui Terme. He has served for almost ten years as principal trumpet of the Maggio Musicale Fiorentino Orchestra – Florence (1999-2002 under Zubin Mehta) and the Accademia di Santa Cecilia Orchestra – Rome (2003-2008 under Antonio Pappano), and has collaborated as principal trumpet with the Chicago Symphony Orchestra (Daniel Barenboim) and the Filarmonica della Scala Orchestra.

In 2011 Marco was featured in a solo tour of Argentina, played with the Mar del Plata and Tucuman symphony Orchestras, held a recital in Buenos Aires and master classes in three different universities.

As an educator, Pierobon has published a didactic DVD about brass instruments. He has held master classes in USA, Canada, England, Greece, Germany and Austria, besides for several Italian festivals and academies. Since 2007 he has been trumpet professor at the Conservatories of Bolzano and Reggio Emilia, Italy.