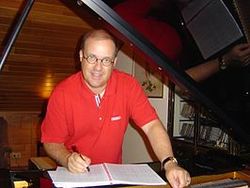 Marco Pütz (b. 16 March 1958, Luxembourg) is a Luxembourgish composer.

Since 1987 he has composed more than 75 works, primarily for wind instruments and for symphonic wind band, but also one musical for children, a string quartet, several compositions for chamber/symphony orchestra and a number of educational pieces.

International recognition came in 1995 with the 1st prize at the International Clarinet Association Composition Contest for his work Quatuor pour Clarinettes. In 1996 Marco was awarded the 2d prize at the 2do Concorso Internationale Augusto Cagnan, Treviso (IT) for his Concertino for Horn & Wind Band. In 2012 he has been a twice finalist at the ITEA-Harvey Phillips Award for Excellence in Composition: 'Five open-ended pieces (tuba/euphonium octet) and Chapters of Life (Tuba Concerto).

Marco Pütz is well known for his works for concert band, many of which have become standards in the wind band repertoire throughout the world.

Since 1980, Marco Pütz has also taught saxophone, chamber music and instrumentation at the Conservatory of Luxembourg. He is a founding member of the Luxembourg Saxophone Quartet (1982-2006). From 1981-2006 he played the saxophone parts for the Luxembourg Philharmonic Orchestra. He is also a board member of WASBE (World Association of Symphonic Bands and Ensembles).