March of the Women Marines 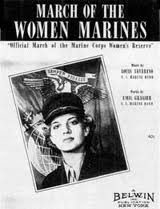 March of the Women Marines

The U.S. Marine Corps Women’s Reserve was established on February 15, 1943. Later in that same year the new unit’s Washington-based band was preparing for a parade on the following day, and the Marine Band commander, Lt. Col. William F. Santelmann, suddenly realized that the women marines had no military march of their own. He immediately summoned Sgt. Louis Saverino, explained the dilemma, and asked for a new march to be ready to perform the next morning. During the 15-minute drive to his home, the composer mentally visualized the full score and spent the next several hours copying the 28 needed parts.

During that same night Saverino composed another march completely and sketched out parts for three more. At eight o’clock the next morning he handed the requested march to Col. Santelmann. Following a rehearsal and a successful parade performance, the composer received a letter of commendation from Marine Headquarters, and the new work became the official March of the Women Marines.

The lyrics celebrate the role of The Marine Corps Women’s Reserve, officially established in February 1943.

MARINES! We are the women members of a fighting corps.
MARINES! The name is known from burning sands to ice-bound shore;
MARINES! We serve that men may fight in air, on land and sea.
MARINES! The eagle, globe, and anchor carries on to make men free.