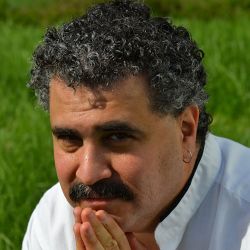 Marc Mellits (b. 1966, Baltimore, Md.) is an American composer and performer.

Mellits studied at the Eastman School of Music from 1984 to 1988, at the Yale School of Music from 1989 to 1991, at Cornell University from 1991 to 1996, and at Tanglewood in the summer of 1997. His composition instructors include Joseph Schwantner, Samuel Adler, Martin Bresnick, Bernard Rands, Christopher Rouse, Roberto Sierra, Jacob Druckman, Poul Ruders, and Steven Stucky.

Mellits's music has been performed throughout the United States, Canada, and Europe. His music is influenced by minimalist and rock music, and has been identified with the post-minimalist stylistic trend. He often composes for electric guitar and other amplified instruments.

Mellits received a 2004 Foundation for Contemporary Arts Grants to Artists Award. Mellits's commissions include pieces for the Orpheus Chamber Orchestra, Bang on a Can All-Stars, Assad Duo, Kronos Quartet, and the Meridian Arts Ensemble. His music has also been arranged by guitarist Dominic Frasca and the experimental music group Electric Kompany.

Mellits is a founding member of Common Sense Composers' Collective, which focuses on new and alternative ways of collaborating with performance ensembles. Mellits is the artistic director and keyboard player in his ensemble, the Mellits Consort.

As of 2011, Marc Mellits lives in Chicago, Illinois and teaches composition at the University of Illinois-Chicago.