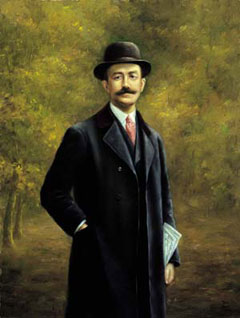 He studied piano with J. Trago and composition with F. Pedrell in Madrid. His opera, La Vida Breve, won the prize awarded by the Academia de Bellas Artes, Madrid, in 1905. It was in 1907 that he went to Paris where he became friends with Debussy, Ravel and Dukas, who aided and encouraged him. Under their influence he adopted the principles of impressionism without, however, giving up his personal and national style. He returned to Spain in 1914 and in 1921 made his home in Granada, frequently touring Europe as a conductor of his own works. In 1938, he was made president of the Instituto de Espana. In 1939, at the end of the Spanish Civil War, disenchanted with the Spanish regime of Franco, he went to Argentina; after conducting a few concerts of his music in Buenos Aires, he withdrew to the small locality of Alta Gracia, where he lived the last years of his life in seclusion.

The music of Manuel de Falla is rooted both in the folksongs of Spain and in the purest historical traditions of Spanish music. Up to 1919, his works were chiefly cast in the Andalusian idiom, and his instrumental technique was often conditioned by effects peculiar to Spain's national instrument, the guitar. He is known especially for El Sombrero de Tres Picos (The Three-Cornered Hat), El Amor Brujo (Love Bewitched), Nights in the Gardens of Spain