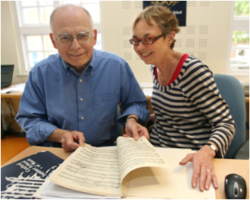 Malcolm Binney (b. 1944, England) is a British composer, conductor, administrator and violinist.

Binney’s professional career began as a freelance violinist with the major London orchestras. He studied conducting at the Guildhall School of Music, where he won the Kapsilis Cup for conducting. He was a pupil of Rafael Kubelik, George Hurst, Garry Bertini, and Sir Georg Solti. His guest appearances include most of the British provincial orchestras, as well as orchestras in Canada, North America, Holland, Italy, and Germany. He was also assistant conductor of the BBC Northern Symphony Orchestra, and has worked with several regional BBC orchestras. Mr. Binney spends several weeks of the year working with young people and his Youth Orchestra training techniques are in much demand throughout Britain and America. Currently, he is Director of Music for the International Summer School of Music at Canford (United Kingdom), and is Professor of Conducting at the Royal Marines School of Music.