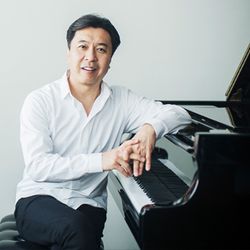 Makoto Ozone (b. 25 March 1961) is a Japanese composer, jazz pianist and educator.

Ozone began playing organ at two, and by seven was an improviser. He appeared on Japanese television with his father from 1968 to 1970. At twelve he switched to piano after being impressed by the albums of Oscar Peterson.

Ozone has collaborated with vocalist Kimiko Itoh. They appeared as a duo at the Montreux Jazz Festival, and he produced her album Kimiko, which won the 2000 Swing Journal jazz disk grand prix for Japanese vocalist.

His career has brought him a Grammy nomination in 2003, and has constantly been in the forefront of the international jazz scene, recording and touring with the greats of Gary Burton, Chick Corea, Paquito D'Rivera, Arturo Sandoval, Branford Marsalis, Jeff “Tain” Watts, Christian McBride, Dave Weckl, Mike Stern and others. In 2004, he formed the "No Name Horses" big band in Japan. The band has been performing in France, Austria, the U.S., the UK, Singapore and Japan ever since.

In recent years, Ozone has also been focusing on works from the classical music repertoire, playing concertos by Bernstein, Mozart, Rakhmaninov, and Prokofiev, with major orchestras both in Japan and abroad. Road to Chopin was released in 2010, celebrating the bicentenary of Chopin's birth, and awarding him the "Chopin Passport" from the Polish government.

Ozone has been in charge of visiting professor of jazz course in Kunitachi College of Music since 2010. He was also awarded the Shiju-HouShyou (The Medal of Honor with Purple Ribbon) in 2018.