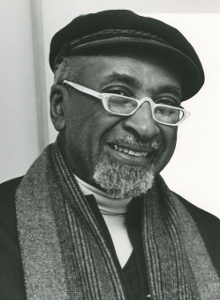 Born in Kansas City, Missouri, Henderson relocated to the Sugar Hill section of Harlem at the age of four. Following a short stint studying mathematics at the City College of New York, he enrolled at the Juilliard School of Music, where he received a Bachelor of Science degree in 1942.

Drafted into the Navy during World War II, Henderson became an arranger for the Navy band stationed at the Naval Station Great Lakes, prior to becoming the staff orchestrator for The U. S. Navy School of Music in Washington, D.C. from 1944 to 1946.

Following the war, Henderson began a long professional association with a number of musical notables of the era, including Duke Ellington, Lena Horne, Jule Styne, and Richard Rodgers. Henderson went on to serve as classical orchestrator for Ellington's symphonic works, receiving the nickname of being Ellington's "classical arm." Henderson's first foray into Broadway theatre was Ellington's Beggar's Holiday, serving as co-orchestrator alongside [[Billy Strayhorn]. He went on to serve as orchestrator, arranger, and musical director on more than fifty Broadway musicals,

Over the course of two decades, Henderson arranged over a hundred pieces for the Canadian Brass. The group's album of Ellington's music, Take the "A" Train, was nominated for a Grammy Award in 2000. Henderson also recorded six albums as the leader of the Luther Henderson Orchestra.