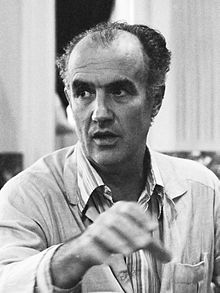 Nono was a member of a wealthy artistic family; his grandfather was a notable painter. Nono began music lessons with Gian Francesco Malipiero at the Venice Conservatory in 1941, where he acquired knowledge of the Renaissance madrigal tradition, amongst other styles. After graduating with a degree in law from the University of Padua, he was given encouragement in composition by Bruno Maderna. Through Maderna, he became acquainted with Hermann Scherchen -- then Maderna's conducting teacher -- who gave Nono further tutelage and was an early mentor and advocate of his music.

Scherchen presented Nono's first acknowledged work, the Variazioni canoniche sulla serie dell'op. 41 di A. Schönberg in 1950, at the Internationale Ferienkurse für Neue Musik Darmstadt. Nono had been a member of the Italian Resistance during the Second World War. It was with Pierre Boulez and Karlheinz Stockhausen that Nono became one of the leaders of the New Music during the 1950s. A number of Nono's early works were first performed at Darmstadt including Tre epitaffi per Federico García Lorca (1951–53), La Victoire de Guernica (1954) -- intended, like Picasso's painting, as an indictment of the wartime atrocity -- and Incontri (1955). The Liebeslied (1954) was written for Nono's wife-to-be, Nuria Schoenberg (daughter of Arnold Schoenberg).

An atheist, Nono had enrolled as a member of the Italian Communist Party in 1952. During the 1960s, his musical activities became increasingly explicit and polemical in their subject, whether that be the warning against nuclear catastrophe, the denunciation of capitalism, the condemnation of Nazi war criminals in the wake of the Frankfurt Auschwitz trials, or of American imperialism in the Vietnam War. Nono began to incorporate documentary material (political speeches, slogans, extraneous sounds) on tape, and a new use of electronics, that he felt necessary to produce the "concrete situations" relevant to contemporary political issues. The instrumental writing tended to conglomerate the 'punctual' serial style of the early 1950s into groups, clusters of sounds -- broad strokes that complemented the use of tape collage. In keeping with his Marxist convictions, he brought this music into universities, trade unions and factories where he gave lectures and performances.

Nono's second period reached its apogee in his second "azione scenica", Al gran sole carico d'amore (1972–74). In this large-scale stage work, Nono completely dispensed with a dramatic narrative, and presented pivotal moments in the history of Communism and class struggle "side-by-side" to produce his "theatre of consciousness". The subject matter (as evident from the quotations from manifestos and poems, Marxist classics to the anonymous utterances of workers) deals with failed revolutions.

Nono had been introduced to the Venice-based philosopher Massimo Cacciari, who began to have an increasing influence on the composer's thought during the 1980s. Through Cacciari, Nono became immersed in the work of many German philosophers, including the writings of Walter Benjamin.

In 1985, Nono came across the aphorism "Travellers, there are no trails – all there is, is travelling" on a wall of the Franciscan monastery near Toledo, Spain, and it played an important role in the rest of his compositions. As Andrew Clements writes about this aphorism in The Guardian, "It seemed to the composer the perfect expression of his own creative development, and in the last three years of his life he composed a trilogy of works whose titles all derive from that inscription."