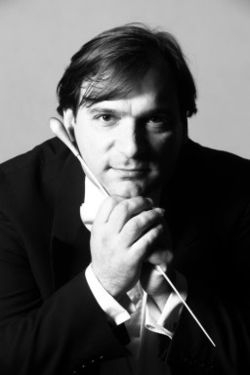 Luís Carvalho (b. 1974, Portugal) is a Portuguese composer, conductor and educator.

Carvalho studied clarinet and composition in Porto with Antonio Saiote and Fernando Lapa, where he was awarded the prize as the best student of the year in 1994. He also studied orchestra conducting in Milan, St. Petersburg and Madrid, with Jorma Panula and Jesus López-Cóbos. He studied contemporary music conducting with Arturo Tamayo, and attended workshops and lectures by renowned composers such as Luis de Pablo (Spain) and Magnus Lindberg (Finland). Carvalho also holds a Doctor of Music degree from the University of Aveiro (Portugal).

He was a prizewinner at the 4th International Póvoa de Varzim Composition Competition (2009) for his orchestral work Metamorphoses… hommage à M. C. Escher; more recently (2012) Carvalho was also been nominated for the Authors Prize of the Portuguese Authors Society (SPA), for another of his orchestral works, Nise Lacrimosa. In 2013 Audiência regional newspaper awarded him the Prestige Trophy for his career devoted to music.

As a conductor, Carvalho appears with most of the Portuguese leading orchestras, namely the Portuguese Symphony, the Porto National, the Lisbon Metropolitan, and the Algarve Orchestra. He is the founder and artistic/music director of Camerata Nov’Arte (Porto), an ensemble which proposes alternative programs, including a well-received tour to Brazil (2013). His repertoire is vast and eclectic, spanning from the baroque to modernity, and includes several premieres. On the scenic/operatic field his experience includes the premiere of Portuguese opera Tale of the Foundation of the City of Coimbra, by Manuel de Faria, La voix humaine by Poulenc, Il secreto de Susanna by Wolf-Ferrari, Pierrot Lunaire by Schoenberg and How to make orange color by Portuguese composer Pedro Faria Gomes.

Dr. Carvalho is a faculty teacher at the Aveiro University (Portugal.