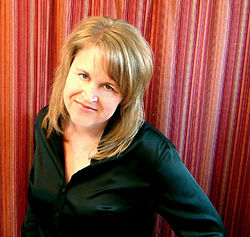 Lost Gulch Lookout, commissioned by John Lynch and The University of Georgia Wind Ensemble, reflects the craggy and colorful landscape of Kuster’s Colorado birthplace through hauntingly beautiful sonorities and tense dissonances. Far from merely nostalgic, her forcefully lean and athletic writing style evokes the jagged nature of the raw terrain on the razor edge of civilization. The visceral, gritty nature of the very canyons themselves are, perhaps, nature’s response to the incessant imposition of humanity into the few remaining unspoiled areas of nature. Kuster says the following of her inspiration:

This piece is really about expansiveness and rocks and the heaviness of rocks; and also sky and wispy clouds above the sky and us living amongst that and in that and the fear that I have of what we’re doing to our natural resources, but also the hope that we can remember how beautiful they are so that we might preserve them.

Sounds consist simultaneously of hauntingly beautiful sonorities and tense dissonances. Kuster achieves this dichotomy by pairing open-sounding perfect intervals (such as fourths and fifths) with a decorating semitone that clashes with both members of the initial intervals. The piece has a modified binary structure, with the unfurling events of the opening repeated again at the work’s midpoint, with even greater fervor. A cadre of percussion batter away unrelentingly, driving the work through its permutations until finally the piece implodes, shattering itself on the very rocks it had so immaculately colored.

Kuster’s Lost Gulch Lookout is an outcropping of rock on the razor edge of civilization, set atop precipices near Boulder and the Denver metro area. The visceral gritty nature of the very canyons themselves are, perhaps, nature’s response to the incessant imposition of humanity into the few remaining unspoiled areas of nature.